The Heritage trail in the village of Lot highlights the industrial history of the canal village. It is a one-way hike starting at the Brussels-Charleroi canal near Sashoek and ending in the ‘Carré’, the working-class district in the southern part of the village. As you follow the trail, you learn more about Lot’s history and heritage. The tour includes stops at the railway station, the Senne bridge, the old wool factory and the former St Joseph’s church of Lot. Finally you reach the old working-class district popularly known as the ‘Carré’, which literally means ‘square’. This district, founded in the sixties of the 19th century, owes its name to its rectangular shape. Strikingly, the original population at the establishment of the district included 40 families from the Waasland region. These families left their homes in Steendorp on the river Scheldt behind and travelled extraordinary distances for that time along the then network of waterways to settle here in Lot and work at the Scheppers weaving mill. 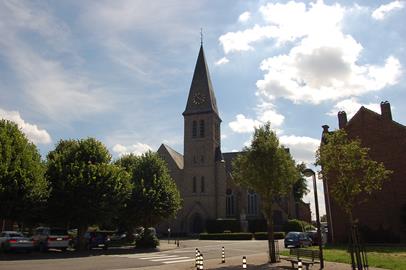